Once a stage manager… 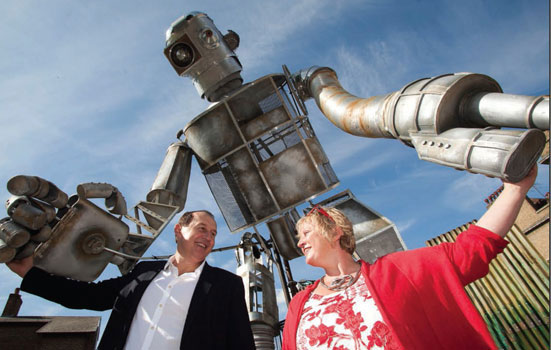 Last summer when the announcement was made that Jenny Sealey and Bradley Hemmings were to be Co-Artistic Directors for the London 2012 Paralympic Games Opening Ceremony, there was a sense of “of course they are”. They are champions of large-scale outdoor work who have worked extensively with disabled artists, their skills are complementary and they have a strong track record of working together on a number of successful projects.

Sealey and Hemmings have been leading innovative organisations for substantial periods of time, during which their respective companies have flourished. Sealey is Artistic Director and joint Chief Executive of Graeae, the leading deaf and disabled theatre company for whom inclusive working and creating an accessible theatrical experience for its audiences is core to what they do. Hemmings is Artistic Director and Chief Executive of the explosion of work every summer that is the Greenwich+ Docklands International Festival (GDIF), where working with disabled artists and audiences has become a significant part of the programming.

After the announcement of their appointment, Sealey and Hemmings spent five weeks brainstorming ideas for the Paralympic Games Opening Ceremony; Sealey described this as a wonderful experience, something rarely afforded to people running companies. While plans are currently under wraps, out of that process came a theme inspired by The Tempest, which by happy coincidence was also what creative teams working on other ceremonies were exploring.

Sealey had just done a production of The Tempest with The Orpheus Centre, an organisation that works with young disabled adults with a passion for the performing arts, and had been struck by how Prospero’s daughter Miranda views people without judgment, which has particular resonance for disabled people.

Hemmings has been instrumental in getting performers to work outdoors for the first time. At Graeae’s wonderful base in Dalston, during a break from rehearsals for the revival of Reasons To Be Cheerful, which is currently on a tour of middle-scale venues, Sealey gleefully explained, “Bradley dragged me out of black box theatre into the outdoor arena.

He introduced me to Strange Fruit, an Australian company which creates eye-popping shows from the top of very tall bendy poles known as sway poles, and in 2008 a commission from GDIF and Liberty enabled Graeae to work with Strange Fruit for the first time. This was part of a programme designed to bring artists and sports people together in the run up to 2012, and prophetically our show featured a medal ceremony.” Aware that none of the sway pole performers were deaf or disabled, Graeae set up training programmes and Sealey described this process as the beginning of a way of working that was completely new to her.

At the same time, Sealey was working with the Rhinestone Rollers, a power-wheelchair dancing troupe who have performed at Liberty in Trafalgar Square and outside the National Theatre. Their latest show Wheels On Broadway interprets hits from some of the most popular musical theatre shows. All performances feature integrated audiodescription, enabling blind and visually impaired people to engage with them, whilst signing singers translate songs into sign language for deaf festival-goers.

In a break between meetings at Three Mills Studios, where the Ceremonies team is based, Hemmings explained, “I started to work with disabled performers at Liberty, where I met Caroline Parker, a leading exponent of signed song.

Caroline and Jenny [Sealey] had worked together and the three of us ended up working on The Alexandras, a cabaret piece in which Caroline was placed alongside two deaf drag queens and an entourage of Muscle Marys in a signed song act inspired by Priscilla Queen Of The Desert.” This had a very visual style but the story telling aspects were limited and Hemmings became interested in developing new ways of telling stories that are inclusive, providing an emotional experience for everyone in the audience. “I originally wanted to be a violinist and am aware that music often carries the emotional narrative in outdoor work,” said Hemmings, adding, “working outdoors means the work needs to have a strong dynamic with the audience – performers can see the audience close up, and can leave at any time if they aren’t engaged”.

Hemmings pointed out, “Being a creative producer for outdoor work is very different to undertaking that role in a building. There are so many variable factors to consider including scale, access and, of course, weather. There are also different challenges and opportunities from working in the outdoors, where the audience often becomes a key player in the dramaturgy or where aspects of the staging might appear out of a familiar cityscape or a park. I try to use my experience of the outdoors to act as creative problem solving protagonist, bringing people from different backgrounds together and providing the glue that binds the artistic team.” Hemmings explained that GDIF offers a fantastic range of locations from world heritage sites in Greenwich to 19th and 20th century industrial sites in Woolwich and Bow, and the 21st century grandeur of Canary Wharf. “In many ways these demonstrate the story of London, so we never run out of ideas.”

In 2009 GDIF commissioned Graeae to create Against The Tide. The following year The Garden was commissioned by Unlimited, the UK’s largest programme celebrating arts, culture and sport by disabled and deaf people, and will be revived on the South Bank while the Paralympic Games is taking place in September. Last year The Iron Man, based on Ted Hughes’s book, was commissioned by GDIF and Without Walls, a consortium of eight outdoor festivals, and toured successfully to Norwich, Brighton, Bristol and Stockton.

Next up for Graeae is Prometheus Awakes, a spectacle co-commissioned by GDIF and Stockton International Riverside Festival and created with the renowned Catalan company La Fura dels Baus. Prometheus Awakes will take place in the grounds of the Royal Museums Greenwich on 22 June, the opening weekend of GDIF, and is part of the London 2012 Festival. The show will be the UK’s first large-scale outdoor spectacle featuring disabled performers. Volunteers are being recruited to be a part of this extravaganza, which will include a 42 person human net raised into the night sky, a vessel representing fire above the audience, a giant wheel moving amongst the audience and a 24 foot high puppet.

But the Paralympics Opening Ceremony will be on a completely different scale to what Sealey and Hemmings have done before, and it’s a challenge to work on such a grand scale with resources, which while huge by the standards they are used to, are inevitably finite. While unable to disclose their plans, Sealey explained that it would have a strong narrative with universal resonance. She described discussions with their designer Jon Bausor and costume designer Moritz Junge as “phenomenal creative meetings” and she is excited to be working with Mark Fisher, the overall Executive Producer in charge of Production Design for all four Ceremonies.

Sealey said the team responsible for casting the ceremonies was “brilliant”; it needs to be, as the Paralympic Opening Ceremony alone requires around 3,000 performers, for which mass auditions were held at the end of February.

Casting has to be complete by the end of April so costumes can be made and rehearsals scheduled. Sealey called the spreadsheets for rehearsals of the four Ceremonies “a thing of beauty”.

Meanwhile back at Graeae and GDIF some changes have had to be made. The boards of Graeae and GDIF recognise that working on the Paralympic Opening Ceremony is a phenomenal opportunity for Sealey and Hemmings and for their organisations, but with the artistic leaders inevitably absent for large amounts of time, there are challenges for the companies, so both decided to strengthen their organisations by making fixed term Associate Director appointments. This has had the additional benefit of offering career development in areas in which there is relatively little mobility.

Amit Sharma has taken on this role at Graeae, and he will direct Prometheus Awakes. Judith Kilvington, Graeae’s Executive Director and joint Chief Executive, has assumed sole Chief Executive duties until Sealey returns full time in Autumn 2012. GDIF has appointed Nathan Curry, Artistic Director of tangled feet and a former Associate Director at the Bush Theatre, to work alongside Hemmings on the delivery of GDIF 2012. Hemmings pointed out: “It’s particularly exciting to bring in someone who has extensive experience of working with text based work, and Nathan’s involvement will provide a new opportunity to look at how we create work outdoors.”

“Through the process lots of artists will have the opportunity to work with each other in an inclusive way”, Sealey suggests, “and many people will have the opportunity to develop skills that will inform outdoor and circus work in the future.” Hemmings hopes it will be “a ceremony which will emotionally resonate with the audience and contribute to the transformation of perception and understanding, changing the way people feel about the contribution disabled people make to society”. Sealey wants people “to judge as Miranda would, marvelling at ‘How beauteous mankind is’ seeing such diversity on a playing field”.

Jodi Myers is an independent arts consultant and a member of the board of directors of Graeae Theatre Company
This article appeared in Prompt Magazine, April 2012