What Next For Musical Theatre?

Once a stage manager…

What Next For Musical Theatre? 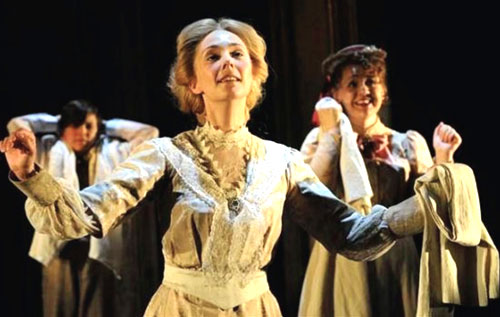 Exploring the complexities of musical theatre today and why it needs meaningful investment to give new work a greater chance of surviving.

Ask people if they like musical theatre and they tend to say they love it or they can’t stand it. But ask them what they understand by the term ‘musical theatre’ and you are likely to get a very wide range of responses. For many the term is synonymous with big Broadway shows, involving dozens of singing, dancing performers and a big orchestra. They may cite specific classics, like Carousel, Guys and Dolls or The Sound of Music. Some will mention recent imports from Broadway such as Spring Awakening or Memphis, or depending on their age, homegrown shows such as Oliver!, Phantom of the Opera, Betty Blue Eyes, Matilda or Made in Dagenham. For others the immediate association is with individual composers and lyricists – Rodgers and Hammerstein, Jerry Herman, Stephen Sondheim or Andrew Lloyd Webber.

But a growing number of practitioners and public are beginning to talk about pieces that have pushed the form itself, have not originated (or ended up) on Broadway or the West End, and appeal to new audiences. The examples they give might include the National Theatre’s London Road, set in Ipswich during a series of murders of prostitutes and subsequent trial, where the spoken text and lyrics were created from verbatim speech. Or Glasgow Girls, a collaboration between National Theatre of Scotland, Theatre Royal Stratford East and the Citizens Theatre, which explored the experience of asylum seekers. More traditional subject matter was the basis for The Go-Between, developed by Perfect Pitch, a collaboration between Derby Live!, Northampton Royal Theatre and West Yorkshire Playhouse, which won Best Musical Production at the 2012 UK Theatre Awards. But the approach was far from traditional, with the entire score being delivered by a single piano, on stage throughout and almost a character in its own right.

Some with longer memories may reference Mass Carib, Felix Cross’ setting of the full mass, sung in Latin, English, French Patois and Yoruba, which debuted at the Albany Empire in 1987. Or Drive Ride Walk, an acapella piece by Osnat Schmool, originally commissioned by the Bridewell Theatre in 2003. One of the distinguishing features of these productions has been the willingness of their creators to continue to revisit and reinterpret them for a variety of locations, contexts and audiences over many years. And of course, revivals can be innovative too – Morphic Graffiti’s intimate version of Carousel at the Arcola in 2014 was something of an ear-opener. At the Edinburgh Fringe last summer over 70 companies considered their original work to be musical theatre, and therefore eligible for a Musical Theatre Network (MTN) award. Their productions covered much more than traditional book musicals. While many were at an early stage of development, what distinguished the most successful was an approach to narrative, music, sound and words that was experimental and audacious. Of course, innovation is not a recent thing – Show Boat, Oklahoma!, Hair,
Company, A Chorus Line and Cats were all ground-breaking in their time.

Rupert Christiansen, writing in the Daily Telegraph, recently bemoaned the lack of hummable tunes in recent West End hits, but that is missing the point. Musical theatre is much more than standalone numbers, as composers and lyricists are exploring many different ways of using song to drive a story and explore characters’ emotions. The emphasis is on ‘theatre’ as much as ‘musical’. In March 2016 a conference convened by two membership organisations: MTN, which works to foster a diverse national musical theatre sector, and Mercury Musical Developments (MMD), dedicated to developing new musical theatre writing, packed out the Arcola. The opening panel included composer Rebecca Applin, producer/casting director Danielle Tarento, director Rupert Goold, producer/director Pravesh Kumar and trainer/musical director Wendy Gadian. Delegates, who very unusually for an arts conference included creative artists – composers, lyricists, book writers and directors – as well as producers from both publically funded and commercial sectors, venues and training organisations, heard a variety of views and experiences. Key themes emerging from the discussion included the danger of producer domination of the sector, the need for artists to be free to make the work they want to make rather than work they think will get produced in the West End, the paucity of medium-sized venues suitable for musical theatre in London, the importance of recognising work created across the country as a whole, and that a long run in the West End is far from the sole measure of success.

Musical theatre is, by its nature, a complex artform and complexity does not come cheap. Despite valuable support from Arts Council England for a number of initiatives, the lack of meaningful investment in its development at all scales is an ongoing concern for the UK. Delegates heard that in the US gestation periods for musical theatre pieces tended to be much longer than those here, so by the time a production is fully launched it has a greater chance of surviving. Perhaps it is time for musical theatre in the UK to replace talk of ‘the right to fail’ with that of ‘a duty to experiment’. The panel was followed by three inspiring provocations on what next for the musical theatre sector – from Susie McKenna, Creative Director at Hackney Empire, on the lack of women in musical theatre; Samuel Adamson, playwright and lyricist, on challenges for the form; and Jenny Sealey, Artistic Director of Graeae, on diversifying the voices telling the stories we get to hear. The breakout sessions that followed resulted in very lively discussions. Unsurprisingly, the day resulted in more questions than answers, but the atmosphere was hugely positive and the feeling of collaboration in the room was palpable.